It's all connected, you know 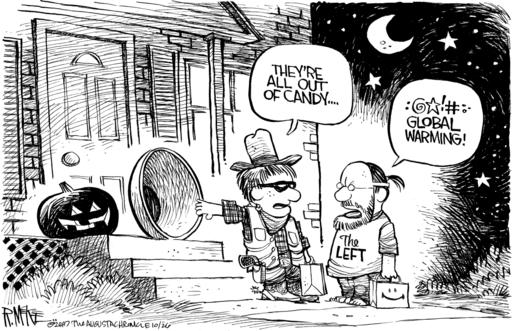 The call of the wild(fire)

Some in the media (perhaps taking a cue from Senate majority leader Harry Reid or the House Select Committee on Energy Independence and Global Warming) seem to have an irresistible urge to tie the southern California wildfires to AGW. See if you can follow the logic in this op-ed by Tom Teepen. He starts by wondering if TEOTWAWKI is near:

Are we leaving our children and grandchildren a failing Earth or a failed one? Is it, in other words, already too late?

That dire question occurs with more chilling plausibility with each new consequence, the subtle to the dramatic equally, from the accelerating biospheric implosion wrought of global warming.

What could possibly turned his mind to such depressing thoughts? The wildfires, of course. Realizing the nonsequitur, he immediately launches into a preemptive "Yeah, yeah, I know":

And, yes, I am going to bring up the wildfires in Southern California and, yes again, I am perfectly aware that weather is not climate. For now, the California fires are the work of weather, an awful convergence of drought and wind and temperature.

But his disclaimer is merely a minor speed bump as he lunges forward with his jeremiad:

But the fires, historic in number, scope and fury, are as well consistent with the catastrophes that computer modeling has long predicted from the warming. We would have to be fools to ignore that.

So. These fires are similar to what some computer models have predicted as an effect of AGW (actually, they're made more likely by drought conditions, which can happen with or without AGW, but never mind that).

Okay. Connection established. Now Mr. Teepen can tear into the "contrarian fringe" that fails to toe the line with the supposed international consensus.

Of course, we are informed, the contrarians are composed almost entirely of political cultists and scientists who have sold their souls to the energy industry.

That reminds me. From the day I started this blog, I have openly solicited cash from the energy industry in exchange for my advocacy (see "About the Heretic" in the sidebar). Alas, nary a penny so far. Where did I go wrong?

Could it be that some of the "contrarian" scientists are offering their views for free as well?

Dr. William Gray, world-renowned hurricane forecaster and perennial burr in Al Gore's saddle, says that there are many more heretics out there than are willing to publicly admit it. If you want to talk about financial incentives, consider that scientists who become vocal in their skepticism tend to lose grant money, so the advocates end up with both the money and the megaphone.

Thus, Mr. Teepen never gets to hear a serious presentation of what the heretics have to say. All he has to go on are Democratic Party and (WhenWillTheyEver)MoveOn.org press releases, so who can blame him?
Posted by Tim at 2:12 PM

Consensus is a political concept, not a scientific one

In an October 9 essay, Financial Times columnist John Kay wrote about why it can be foolish to allow scientific "consensus" to drive policymaking. Here are some excerpts:

Consensus finds a way through conflicting opinions and interests. Consensus is achieved when the outcome of discussion leaves everyone feeling they have been given enough of what they want. The processes of proper science could hardly be more different. The accomplished politician is a negotiator, a conciliator, finding agreement where none seemed to exist. The accomplished scientist is an original, an extremist, disrupting established patterns of thought. Good science involves perpetual, open debate, in which every objection is aired and dissents are sharpened and clarified, not smoothed over.

Often the argument will continue for ever, and should, because the objective of science is not agreement on a course of action, but the pursuit of truth. Occasionally that pursuit seems to have been successful and the matter is resolved, not by consensus, but by the exhaustion of opposition. We do not say that there is a consensus over the second law of thermodynamics, a consensus that Paris is south of London or that two and two are four. We say that these are the way things are.

[...]Science is a matter of evidence, not what a majority of scientists think.

[...] [T]o use the achievements of science to assert the authority of scientists undermines that very process of science. When consumers believe that genetically modified foods are unsafe, mothers intuit that their children’s autism is caused by the MMR vaccine and politicians assert that HIV/Aids is a first world conspiracy, the answer that the scientific consensus is otherwise does not convince – nor should it. Such claims are mistaken because there is no evidence for them, not because scientists take a different view: scientists should influence policy by explaining facts and arguments, not by parading their doctorates.

How Al Gore spoiled my breakfast

Each Wednesday I go to the office a couple of hours late so I can enjoy an old-fashioned, sit-down breakfast with my family. For today's breakfast I had to run to the nearby supermarket to pick up some milk and eggs. An unpleasant surprise awaited me.

Because of the unrelenting push to reorder our lives and our economy to accommodate the fantasies of the CoGW, the price of goods, both durable and nondurable, is climbing.

Those who are on the lower end of the personal wealth scale, as they ponder whether they can afford to put food on the table, should reflect on how Mr. Gore managed to get the Nobel "Peace" Prize for his efforts.
Posted by Tim at 11:19 AM 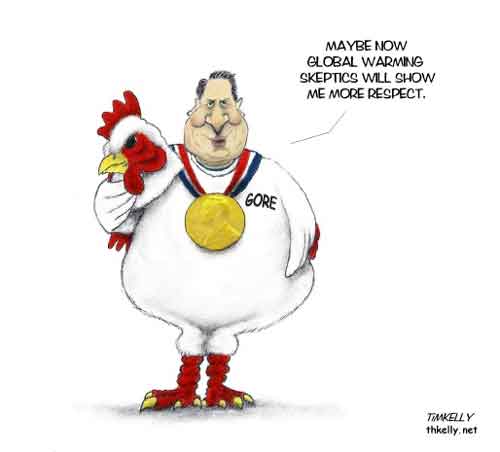 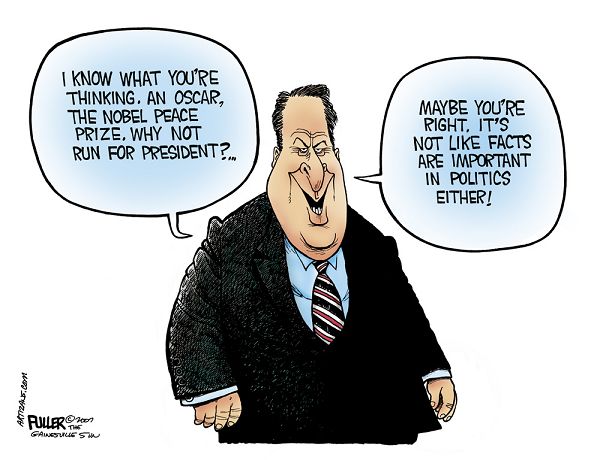 Newsweek editor and objective climate expert Sharon Begley on why the magazine has no obligation to cover arguments against the notion that climate change is caused by humans:

When you cover the history of the space program, you don't quote the percentage of Americans who think the moon landings took place on a stage in Arizona.

For the record, the stage was in Nevada, not Arizona. You'd think she'd do a little fact-checking before spouting off like that.
Posted by Tim at 3:41 PM