Al Gore didn't get the memo

Well, what do you know? Al Gore and I share at least one thing in common: We both left our lights on during Earth Hour on Saturday. World Net Daily reports:

Drew Johnson, the president of the Tennessee Center for Policy Research, decided to drive by Gore's mansion in Nashville at 8:48 p.m. and records that floodlights were on illuminating the driveway leading up to the main quarter.

"I pulled up to Al's house, located in the posh Belle Meade section of Nashville, at 8:48 p.m. – right in the middle of Earth Hour," he wrote on his blog. "I found that the main spotlights that usually illuminate his 9,000 square foot mansion were dark, but several of the lights inside the house were on."

He added: "The kicker, though, were the dozen or so floodlights grandly highlighting several trees and illuminating the driveway entrance of Gore’s mansion. I [kid] you not, my friends, the savior of the environment couldn’t be bothered to turn off the gaudy lights that show off his goofy trees."

100+ scientists call Obama out on his AGW alarmism

The Cato Institute has published a full-page ad in many newspapers politely accusing President Obama of being factually inaccurate in his climate change alarmism.

Over 100 scientists agreed to lend their names to the following statement (View complete statement in HTML | PDF):

"Few challenges facing America and the world are more urgent than combating climate change.The science is beyond dispute and the facts are clear."

With all due respect
Mr. President, that is not true.
We, the undersigned scientists, maintain that the case for alarm regarding climate change is grossly overstated. Surface temperature changes over the past century have been episodic and modest and there has been no net global warming for over a decade now. After controlling for population growth and property values, there has been no increase in damages from severe weather-related events. The computer models forecasting rapid temperature change abjectly fail to explain recent climate behavior. Mr. President, your characterization of the scientific facts regarding climate change and the degree of certainty informing the scientific debate is simply incorrect.

Bravo to Cato and to the scientists who put their professional reputations on the line to challenge the "consensus".
Posted by Tim at 11:15 AM

How we observed Earth Hour

As many of you know, Saturday, March 28, from 8:30-9:30pm local time was designated as "Earth Hour". This event was devised by the World Wildlife Fund as a way for people around the world to show how much they care about the climate change crisis.

Its organizers acknowledge that an event directing people to turn out their lights for an hour is purely symbolic, but they believe that with widespread participation, an important message will be sent to the world's leaders:

This is not so much about saving energy. It is more a massive, global and overwhelming signal to our nations' leaders to say that climate change is important. That it matters a great deal. That we care. Now do something about it!

Climate change is important. It matters. We care. Now, leaders: get out there and send the global economy further into the abyss, all for the sake of unproven, questionable speculations about the role of carbon dioxide in the earth's climate! Yeah! 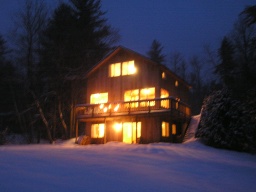 Not wanting to be left out, our family took care to show how much we care about the climate alarmism that is sweeping the planet. This picture shows how our house looked between 8:30 and 9:30 local time this evening.

Just kidding; I don't even know whose house that is. It's certainly not in our part of Texas.

But we did leave our lights on.

We didn't go out of our way to turn on additional lights, even though theoretically there was a lot of unused electricity out there at the time. We just went about our normal business of living our lives, not being deliberately wasteful, but also not feeling guilty for what we do use.

By now, the west coast of the U.S. is in the 8:30-9:30 zone, nearly completing the event's trek around the world. Interestingly, as early as 6:00pm U.S. Eastern time, Reuters was reporting that a billion people were participating in the event, a number which, as NewsBusters points out, could not possibly have been true at the time the article was posted.

So how does Reuters report that a billion people took part? According to the International Energy Agency, "Some 1.6 billion people, about one quarter of the world’s population, have no access to electricity today." The CIA estimates the world's population at 6.7 billion, so that would mean about 5 billion people in the world could shut off their lights in the global feel-good exercise. For Reuters to be correct in its one billion people claim, one out of five people would have had to participate. Since Earth Hour hadn't even arrived for much of the world at the time Reuters released its report, how can the agency already state as fact that there were a billion participants?

The obvious answer is it couldn't. Reuters made up a nice, round number to buttress its contention of massive worldwide support for Earth Hour. And no doubt it'll be picked up by mainstream media outlets across the country.

WWF did set a goal for 1 billion people to participate, so perhaps Reuters was engaging in a bit of hopeful speculation. Journalistic malpractice, sure, but all in service of a good cause.
Posted by Tim at 10:33 PM