My previous blog (active from May 2004 until January 2006) was dedicated to a constitutionalist, conservative view of politics, culture and religion (particularly in the United States). I walked away from that blog, not because I had run out of steam (or opinions), but because my life priorities started to pull me toward other pursuits.

Those pursuits are still most important to me, but I have been increasingly distressed to see the absurd success of global warming alarmism throughout the world.

It has seemed so clear to me that the global warming (or climate change, or whatever they're calling it this week) juggernaut has been only 10 percent science mixed with 90 percent politics. If this was a purely scientific issue, why would we see it -- alone of all scientific pursuits -- declared to be "settled" and closed to further inquiry? Why else would the media be giving the time of day to people who say that those who challenge the orthodoxy are the moral equivalent of Holocaust deniers? When some Hollywood climate expert like Leonardo DiCaprio proclaims that humanity possibly faces extinction because of global warming, why doesn't someone on the pro-AGW side ask him to stop making their cause look bad?

Because in the AGW "debate", facts matter less than public opinion does.

There are plenty of skeptics out there -- many of whom are accomplished scientists in fields that are actually relevant to climate studies, and many of whom began as True Believers in AGW -- but they're being shouted down, slandered, blacklisted, denied tenure, fired. The world's media dutifully cooperates in the destruction of those whose only crime is to say that the alarmists have not made their case, or -- even worse -- that the alarmists are misinterpreting or deliberately twisting the evidence.

For the most part, the "heretics" are not allowed to make their case in the popular press, so it is up to alternative media to spread the word.

My goal with this blog is to locate and highlight the arguments of those who make reasoned arguments against the orthodoxy. I also intend to highlight the excesses of the Anthropogenic Global Warming juggernaut (and occasionally poke fun at its more absurd self-appointed spokespeople).

Is the planet currently warming? Maybe, maybe not. Believe it or not, the evidence is not conclusive (and don't try pulling that hockey-stick scam on me).

If warming is in fact occurring, is it human-induced (i.e. anthropogenic)? There is no -- zero, zilch, nada -- conclusive evidence to this effect, despite what you hear daily from pundits and politicians. It is often asserted, often assumed, but to my knowledge never demonstrated beyond reasonable doubt or on a preponderance of the evidence. 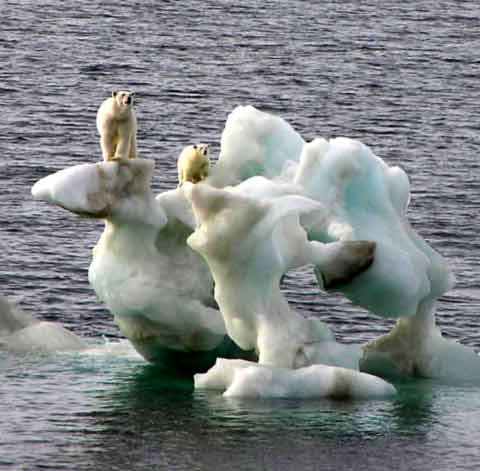 I have seen far too many instances of friends and acquaintances who are otherwise well educated but who far too readily believe that, for example, the above widely-circulated photo actually depicts polar bears that were stranded on ice that was being melted by global warming. In countless cases, AGW propaganda is peddled as truth day after day after day, and enough people are swayed that the peddlers can claim a popular mandate for their remedies.

Cui bono? Who benefits from this? After observing the debate for many years, it seems clear to me that nearly every policy prescription related to AGW fits in quite nicely -- either directly or indirectly -- with the agenda of the environmental left. Make no mistake -- the current juggernaut is being driven not by scientists dispassionately analyzing data, but rather by men and women who appear to despise modern civilization. Many of them see the earth as already unsustainably overpopulated, and view with suspicion any technology advancement that makes life easier (thus enabling us to live longer and have more kids).

In addition, many on the environmental left have what amounts to a religious reverence for all non-human life on earth, and for the earth itself. Some see humanity as a virus that is making Mother Earth sick. Of course, if someone is sick, the obvious remedy is to do whatever is possible to reduce or eliminate the virus. Failing that, attempts by humanity to encroach on Mother Earth's domain (via housing developments, highways, dams, etc.) are opposed wherever possible, or made prohibitively expensive through environmental regulations.

Implementing the Kyoto Accords would be economically disastrous, and study after study indicates that full compliance would have a negligible impact on global CO2 levels (granting for the moment the debatable claim that CO2 levels drive temperature change, rather than vice versa). But let's not talk about that. Let's talk about polar bears stranded on ice because George W. Bush won't submit the Kyoto Treaty for ratification. You probably hate polar bears, don't you?

As you likely can see from the preceding paragraphs, I have strong opinions on this topic. But you gotta believe me when I say in my profile that I'm an all-around nice guy. Although my views are strongly presented, they are presented without malice.

I am starting out with the comments feature enabled, and I welcome civil discussion of any and all points that I raise. I reserve the right to decline the publishing of any comment that I think violates my standards of civil discussion. Use of what Mr. Spock referred to as "colorful metaphors" will probably keep your comment from being posted. 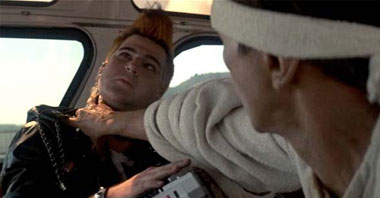 I also reserve the right to close comments on any thread if I believe that circumstances warrant doing so. Yes, the final decision is mine. I hope that doesn't ruin your day. Feel free to start your own blog and rant about how mean, ignorant, hateful, etc. I am.

Anonymous comments are currently allowed, but this is done to allow you to post without having a Blogger account -- it is not meant to be a cover for boorish behavior.

If you have something that you simply must tell me, but you can't bear the thought of others seeing it, feel free to send me a private message at the address listed in the sidebar.

As I mentioned at the beginning of this post, other life pursuits are still top priority for me, so I expect that posting will come at varying intervals. If you don't wish to check the blog every day, feel free to subscribe to the newsfeed.