Live Earth: CO2 for me, but not for thee

Today's the big day, the unofficial kickoff of the Gore 2008 presidential campaign (unless, of course, he's aiming for something higher).

During Live Earth, we'll hear those who can afford so-called carbon offsets tell those who can't afford them how to live.

I could go on and on, but my point is that those who will be lecturing us on our lifestyle today have no intention of giving up their own.

The U.K.'s Daily Mail has a marvelous rant today on the hypocrisy of the elites as well as the hypocrisy of the event itself, considering the gargantuan carbon footprint it will leave. Entertainers flying themselves, their retinues and their equipment by private jet, often halfway across the globe. Travel by music fans to the various concert venues. Electricity expended at the events. Electricity expended by 2 billion music fans (at least, that's how many Al Gore says there will be) watching for multiple hours on TV. Countless tons of trash left behind by concertgoers (how many trees will end up sacrificing themselves for the Cause?).

Here's how the Daily Mail article describes the environmental impact of the event:

The total carbon footprint of the event, taking into account the artists' and spectators' travel to the concert, and the energy consumption on the day, is likely to be at least 31,500 tonnes of carbon emissions, according to John Buckley of Carbonfootprint.com, who specialises in such calculations.

Throw in the television audience and it comes to a staggering 74,500 tonnes. In comparison, the average Briton produces ten tonnes in a year.

The concert will also generate some 1,025 tonnes of waste at the concert stadiums - much of which will go directly into landfill sites.

I'll do my part for the planet today by declining to watch the TV coverage. Then again, I'll probably offset the savings by mowing the lawn. Sigh.


7/12 UPDATE: Some post-event 'toon reactions (click each to view the full-sized image): 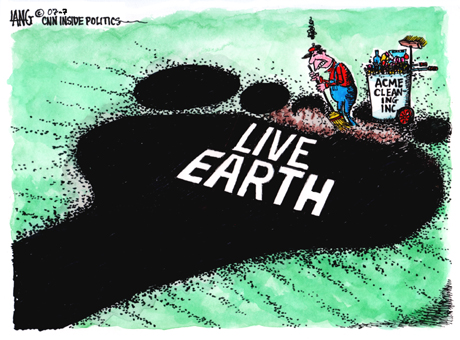 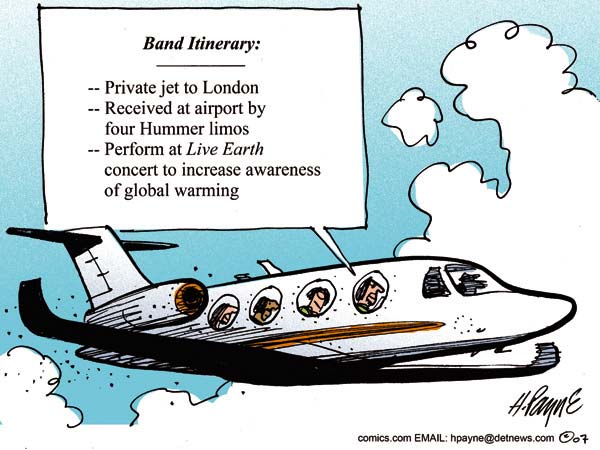 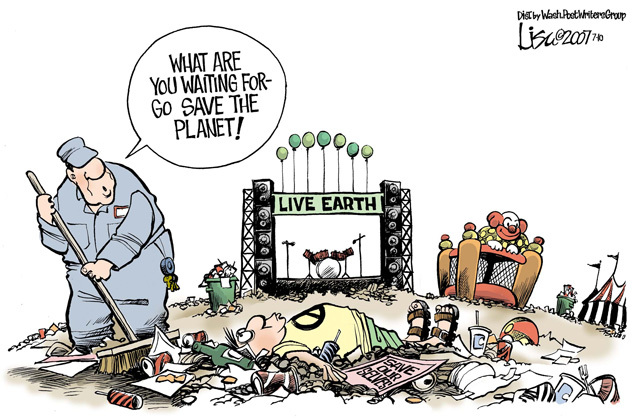