From the London Times via Fox News, January 17:

Greenland's ice sheet shrank more rapidly last summer than at any other time in the past 50 years, measurements have shown.

Researchers said the extent of the melt was evidence that the ice sheet was in "inexorable decline" because of global warming.

The researchers found a shift in meteorological patterns over the past 15 years, with a direct correlation being found between Greenland's weather and the generally warmer weather across both the northern and southern hemispheres.

On Disko Bay in western Greenland, where a number of prominent world leaders have visited in recent years to get a first-hand impression of climate change, temperatures have dropped so drastically that the water has frozen over for the first time in a decade. “The ice is up to 50cm thick,” said Henrik Matthiesen, an employee at Denmark’s Meteorological Institute who has also sailed the Greenlandic coastline for the Royal Arctic Line. ‘We’ve had loads of northerly winds since Christmas which has made the area miserably cold.’ Matthiesen suggested the cold weather marked a return to the frigid temperatures common a decade ago. 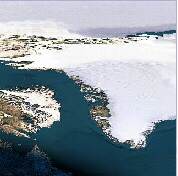