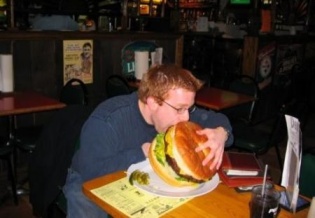 Sigh. Another day, another article informing us that our meat consumption -- especially western beef consumption -- is killing the planet. This February 16 AFP article even manages to drag in a comparison with the Hitler of the automotive world:

Simply switching from steak to salad could cut as much carbon as leaving the car at home a couple days a week.

That's because beef is such an incredibly inefficient food to produce and cows release so much harmful methane into the atmosphere, said Nathan Pelletier of Dalhousie University in Canada.

Pelletier is one of a growing number of scientists studying the environmental costs of food from field to plate.

By looking at everything from how much grain a cow eats before it is ready for slaughter to the emissions released by manure, they are getting a clearer idea of the true costs of food.

The livestock sector is estimated to account for 18 percent of global greenhouse gas emissions and beef is the biggest culprit.

Even though beef only accounts for 30 percent of meat consumption in the developed world it's responsible for 78 percent of the emissions, Pelletier said Sunday at a meeting of the American Association for the Advancement of Science.

That's because a single kilogram of beef produces 16 kilograms carbon dioxide equivalent emissions: four times higher than pork and more than ten times as much as a kilogram of poultry, Pelletier said.

By the way, that 1:16 ratio of beef to CO2 emissions cited in the last paragraph seriously undermines the 1:36 ratio claimed by Japanese alarmists in another AFP article we highlighted back in July of 2007.

Kind of makes me wonder if they're just making stuff up.
Posted by Tim at 4:34 PM