Al Gore, high priest of the CoGW, has come under intense criticism for his lifestyle -- his lavish, energy-hogging mansion in Tennessee, his conspicuous consumption of jet fuel as he goes from place to place to preach his environmental jeremiad. He tries to assure us that he's carbon neutral -- mainly through the fraudulent concept of carbon offsets.

But he doesn't need to personally spend time defending himself, because he has a sufficient number of adoring fans in the media and in Hollywood to do the job for him. For example, here's what actor, moviemaker and climate expert Leonardo DiCaprio had to say*:

DiCaprio defended Gore from criticism over the amount of energy he has been reportedly using to jet around the world and to run his home.

"Don't shoot the messenger", he said. "This person is trying to relay a message to the public and the way that he travels should not be splayed out like that."

And on he goes, secure in the knowledge that he can get away with any violation of the remedies he tries to force on the rest of us. 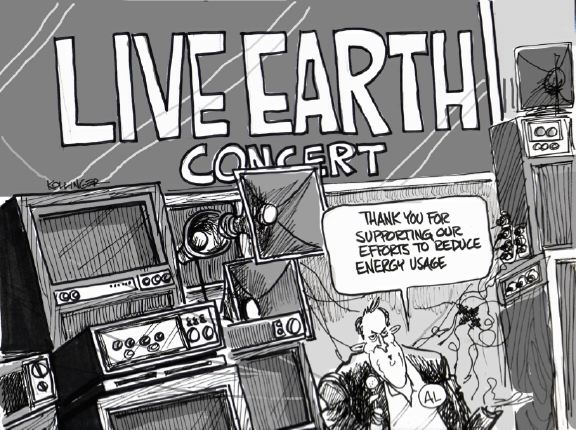 * Quote originally from The London Paper, but the content doesn't appear to be online any more.
Posted by Tim at 9:22 AM