Never mind the terrorists... this is IMPORTANT

Some in Congress appear to believe that the climate change threat to America is equal to (or even greater than) the threat posed by the islamist terror network (Boston Globe, April 9):

The CIA and Pentagon would for the first time be required to assess the national security implications of climate change under proposed legislation intended to elevate global warming to a national defense issue.

The effort would include pinpointing the regions at highest risk of humanitarian suffering and assessing the likelihood of wars erupting over diminishing water and other resources.

The measure also would order the Pentagon to undertake a series of war games to determine how global climate change could affect US security, including "direct physical threats to the United States posed by extreme weather events such as hurricanes."

The growing attention to global warming as a national security issue could open new avenues of support for tougher efforts to limit greenhouse gases, according to specialists.

"If you get the intelligence community to apply some of its analytic capabilities to this issue, it could be compelling to whoever is sitting in the White House," said Anne Harrington , director of the committee on international security at the National Academy of Sciences in Washington. "If the White House does not absorb the independent scientific expertise, then maybe something from the intelligence community might have more weight."

The measure, sponsored by Senator Chuck Hagel , a Nebraska Republican, and Senator Richard J. Durbin , an Illinois Democrat, comes as other international bodies are taking steps to designate global warming as a high international priority.

Remember, this is in spite of the fact that the earth is still cooler than it was during the Medieval Warm Period, which had silver mines and thriving communities in areas now covered by glaciers. 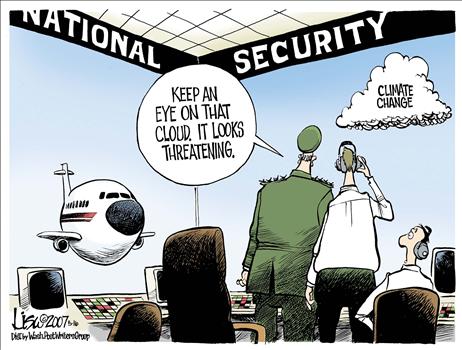