The earth itself plays a role in its (perceived) climate 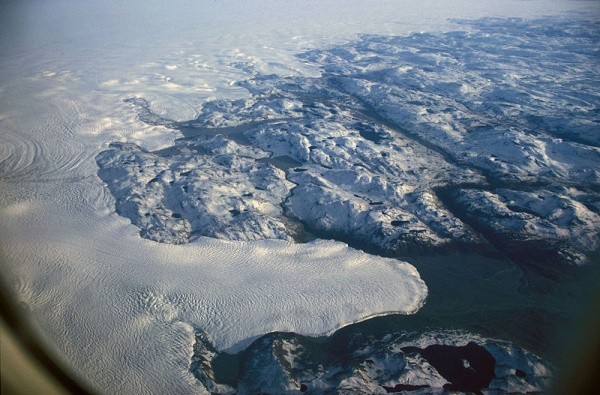 Just after poking some fun at The Daily Green for ignoring the sun as a culprit in climate change, I came across an Ohio State University press release that puts an interesting spin on the changes in the Greenland ice sheet.

OSU researchers, however, have found that the earth itself joins the sun in contributing to many of the observed phenomena that are so casually attributed to AGW:

Scientists have discovered what they think may be another reason why Greenland 's ice is melting: a thin spot in Earth's crust is enabling underground magma to heat the ice.

They have found at least one “hotspot” in the northeast corner of Greenland -- just below a site where an ice stream was recently discovered.

The researchers don't yet know how warm the hotspot is. But if it is warm enough to melt the ice above it even a little, it could be lubricating the base of the ice sheet and enabling the ice to slide more rapidly out to sea.

“The behavior of the great ice sheets is an important barometer of global climate change,” said Ralph von Frese, leader of the project and a professor of earth sciences at Ohio State University. “However, to effectively separate and quantify human impacts on climate change, we must understand the natural impacts, too.

The ice sheet in northeast Greenland is especially worrisome to scientists. It had no known ice streams until 1991, when satellites spied one for the first time. Dubbed the Northeastern Greenland Ice Stream, it carries ice nearly 400 miles, from the deepest interior of the island out to the Greenland Sea.

“Ice streams have to have some reason for being there. And it's pretty surprising to suddenly see one in the middle of an ice sheet,” von Frese said.

The newly discovered hotspot is just below the ice stream, and could have caused it to form, the researchers concluded. But what caused the hotspot to form?

“It could be that there's a volcano down there,” he said. “But we think it's probably just the way the heat is being distributed by the rock topography at the base of the ice.”

Dr. von Frese said it well: "[T]o effectively separate and quantify human impacts on climate change, we must understand the natural impacts, too."