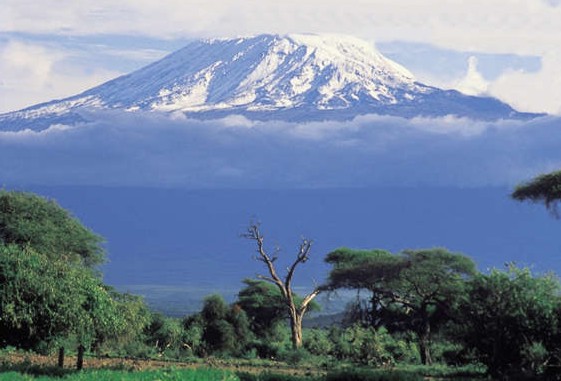 If you watched An Inconvenient Truth (my condolences if you have), or if you have read any one of countless media reports on AGW, you might have gotten the impression that the snowcap on Mount Kilimanjaro in Tanzania is melting.

It is in fact shrinking, but that's due to sublimation, the process by which something changes from its solid state directly into its gaseous state in below-freezing temperatures without first melting. The temperature atop Kilimanjaro is nowhere near what is needed for melting. Low humidity in the region -- not warming -- is driving the sublimation. And guess what? It's been happening for more than a century.

I suppose I shouldn't expect the New York Times' travel writers to know that, but it still irks me to see such easily-refuted assertions repeated ad nauseam in the media. Here is what the NYT had to say about Kilimanjaro in its feature, The 53 Places to Go in 2008:

Time may be running out to see the most famous snows of American literature. The ice-capped peak of Kilimanjaro, Africa's highest mountain, is melting at an alarming rate. Within several decades, scientists predict, the glaciers will have completely disappeared.

But wait! They didn't actually say it was because of global warming. What gives, Mr. Heretic?

True, they didn't mention AGW directly, but they did substitute a code phrase -- "melting at an alarming rate" -- that leave little room for any other interpretation. Why should anyone be "alarmed" about this if they considered it to be a natural process with no human influence?
Posted by Tim at 9:21 AM