Is mandatory recycling destroying the planet?

One adviser to the British government has some heretical opinions about one of the sacraments of environmentalism, curbside recycling, as reported January 28 by The Telegraph:

Peter Jones suggested that an "urgent" review of Labour's policy on recycling was needed to make sure the collection, transportation and processing of recyclable material was not causing a net increase in greenhouse gases.

Mr Jones, a former director of the waste firm Biffa and now an adviser to environment ministers and the London Mayor, Boris Johnson, also dismissed kerbside recycling collections in many areas as "stupid" because they mixed together different materials, rendering them useless for recycling.

He suggested that much of the country's waste should simply be burnt to generate electricity.

"It might be that the global warming impact of putting material through an incinerator five miles down the road is actually less than recycling it 3,000 miles away," he said.

"We've got to urgently get a grip on how this material is flowing through the system; whether we're actually adding to or reducing the overall impact in terms of global warming potential in this process." 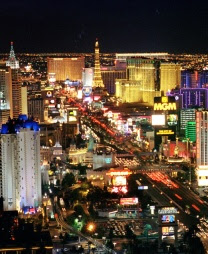 Las Vegas' infamous casino district, The Strip, with perhaps one of one of the largest carbon footprints per unit area to be found anywhere, will join others in pretending to be concerned about climate change on March 28. Las Vegas Review-Journal, January 29:

Planned marquee outages on the Strip come along about as often as Megabucks jackpots.

And like many of those slot-machine fortunes, lights-out events on Las Vegas Boulevard typically don't last long.

But on March 28, signs and message boards along the Strip -- the brightest spot on Earth when viewed from space, the lore goes -- will power down for 60 minutes as part of a global event intended to raise awareness of climate change.

Getting the Strip in on Earth Hour is a significant move, said David G. Schwartz, director of the Center for Gaming Research at the University of Nevada, Las Vegas.

"When it means something, turning down lights on the Strip is a very touching tribute, and it can be very effective," Schwartz said. "For the Strip to stop anything is a really big deal. The Strip doesn't like to do that."

It will be one of the few times Strip lights have been darkened for specific occasions, such as the deaths of presidents and entertainers.

This time, the lights will fade to honor Mother Earth. And it's not just resort owners on the Strip who'll participate: Nearly two dozen properties off the boulevard are scheduled to take part, including the Palms and properties belonging to Station Casinos and Boyd Gaming Corp.

Once the hour is done (with gamblers inside the casinos perhaps unaware of the spectacle outside), the warm glow of having Done Something To Save The Earth will be replaced by the warm glow of countless neon lights and incandescent bulbs, and The Strip will move on as if nothing had happened.
Posted by Tim at 8:55 AM