"Scientists say". Perhaps you just breezed by that part of the sentence, but in my opinion it should immediately raise a red flag.

"Scientists say"? How many? Of what field? What are their qualifications? The article only mentions two (technically qualifying for the plural form of the word "scientist"), but the lede is written as if this is the -- wait for it -- consensus opinion.

By attaching "scientists say" to whatever the conclusion of the moment happens to be, the journalist seems intent on leading us to believe that there is no meaningful disagreement with said conclusion in the scientific community.

I could write an article entitled, "Scientists say Al Gore is full of it" -- but I would immediately come under withering fire by acolytes of the CoGW, even though there are certainly scientists out there who believe this.

This may seem like a nitpick, but I think that the continual use of this misleading appeal to authority is part of the reason that such a high percentage of news consumers have bought into the AGW hypothesis. 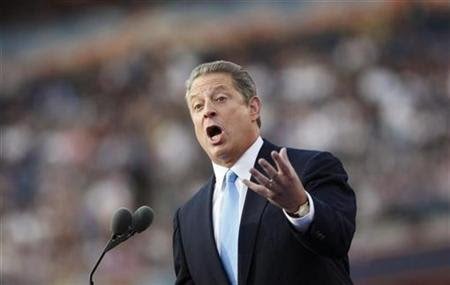 Al Gore is a poor substitute for Placido Domingo, bloggers say
Posted by Tim at 5:07 PM 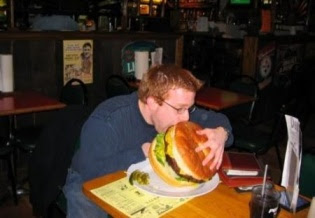 Sigh. Another day, another article informing us that our meat consumption -- especially western beef consumption -- is killing the planet. This February 16 AFP article even manages to drag in a comparison with the Hitler of the automotive world:

Simply switching from steak to salad could cut as much carbon as leaving the car at home a couple days a week.

That's because beef is such an incredibly inefficient food to produce and cows release so much harmful methane into the atmosphere, said Nathan Pelletier of Dalhousie University in Canada.

Pelletier is one of a growing number of scientists studying the environmental costs of food from field to plate.

By looking at everything from how much grain a cow eats before it is ready for slaughter to the emissions released by manure, they are getting a clearer idea of the true costs of food.

The livestock sector is estimated to account for 18 percent of global greenhouse gas emissions and beef is the biggest culprit.

Even though beef only accounts for 30 percent of meat consumption in the developed world it's responsible for 78 percent of the emissions, Pelletier said Sunday at a meeting of the American Association for the Advancement of Science.

That's because a single kilogram of beef produces 16 kilograms carbon dioxide equivalent emissions: four times higher than pork and more than ten times as much as a kilogram of poultry, Pelletier said.

By the way, that 1:16 ratio of beef to CO2 emissions cited in the last paragraph seriously undermines the 1:36 ratio claimed by Japanese alarmists in another AFP article we highlighted back in July of 2007.

Kind of makes me wonder if they're just making stuff up.
Posted by Tim at 4:34 PM

Go ahead and have another child, you planet-hater 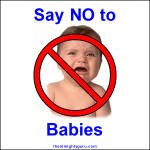 In 2007 we heard about Toni Vernelli, who saw getting an abortion as a moral duty in light of the AGW crisis. We also heard from an Australian researcher who proposed that any family having more than two children should buy what amounts to an excess-child carbon offset to atone for these kids' share in the destruction of the planet.

It's been more than a year, and you just haven't been paying attention, have you? Some of you have even gone ahead and made more babies, haven't you? And let's not even get started on Nadya Suleman, who just birthed octuplets.

Scott Kotler at Psychology Today's blog has a message for you: You're unbelievably selfish, you're a resource thief, and you're a murderer.

Kotler believes that a global population of 2 billion people is the utter limit of sustainability, and that we need to get right on to the task of reducing the human headcount to that level.

His solution: STOP HAVING KIDS FOR FIVE YEARS. Everybody, everwhere. This isn't quite as far-reaching as the solution of the Voluntary Human Extinction Movement, to wit, that we stop having kids forever, but it is extreme nonetheless.

We have spent the past 4000 years trying to shrug off the nightmare that is Biblical advice. We no longer sanction slavery or believe it okay to stone a woman to death for wearing sexy clothing or any of that other nonsense—but go forth and multiply?

Got to be the worst advice in the history of the world.

And sure, a five year ban won’t fix all of this and it raises some questions as well—like how do we insure that year six won’t produce an influx of offspring?

So here’s my answer: Personal responsibility. A grassroots movement means we mean it. It means people having children in year six would feel shame and embarrassment at their unbelievable selfishness.

And it won't be an isolated incident, it'll be a global catastrophe.

How can he be any more clear? If you don't get with the program, the death of our planet from climate change will be on your conscience. 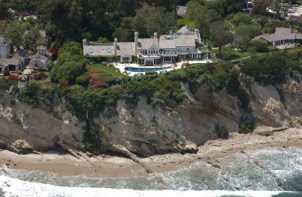 Writing for Big Hollywood, blogger Iowahawk pokes fun at movie stars whose lifestyles belie their claims to be concerned about the environment:

A Go-Green Guide for the Hollywood Community

The signs are ominous, but it’s not too late to do something. As a member of the entertainment community, you are uniquely qualified to save our planet from coming climate disaster. But it will take more than raising awareness — it will take action. Have your personal assistant add these 10 to-dos to your Blackberry, and let’s get the Earth on the road to recovery!

1. Reduce Water Consumption. One single dripping faucet or flushed bidet may not seem to be much of an environmental threat, but those numbers really add up when you’re hosting an NRDC fundraiser for Laurie David and all 10 of your bathrooms are in use. When possible, encourage guests to pee in the pool, and remind them that “if it’s yellow, let it mellow.” Unless you’re serving asparagus canapes.

2. “Green Begins At Home.” Whether you live in East Hampton or Topanga Canyon, there are dozens of little things you can do around your compound to reduce your carbon footprint. For instance, tell your groundskeeping crew to plant a tree. Save your leftover foie gras to grow your own homemade organic Botox. Turn off your energy wasting security cameras between 1 AM and 7 AM. If you own a vanity cattle ranch in Montana, email the trail boss and tell him/her to add Beano to your herd’s feed to reduce ozone-depleting methane emissions.

3. Upgrade To a New Gulfstream G550. Next time you take off for Cannes or Sundance or that big Environmental Defense Fund gala, stop and think how much fuel that clunky old G450 is using. Not only does the new G550 have real burled walnut and 10.8% better fuel efficiency, it has smoother ride — meaning 20% fewer annoying turbulence-related Cristal and cocaine spills. And with a maximum cruising speed of Mach 0.885 you’ll never be late for the red carpet at the Palm d’Or!

4. Crush a Third World Economic Development Movement. One of the most pressing threats facing our environment is rising income in Africa, Asia, and Latin America. A generation ago these proud little dark people were happily frolicking in the rain forest, foraging for organic foods amid the wonders of nature. Today, corrupted by wealth, they are demanding environmentally hazardous consumer goods like cars and air conditioning and malaria medicine. You can do your part to stop this dangerous consumerism trend by supporting environmentally progressive leaders like Hugo Chavez and Robert Mugabe, and their programs for sustainable low-impact ecolabor camps.

The remaining suggestions are well worth the read.