Democrats in Congress love to gin up popular support for their causes by bringing in demonstrably nonexpert celebrities to give high-profile, impassioned testimonies.

In this week's episode, we learn that if we don't Do Something Now, we face The End Of The World As We Know It (TEOTWAWKI). Let's meet the climate scholars who testified.

An argument could be made for hearing from Corwin, whose college education is actually related to wildlife. Judd, however, has only a bachelor's degree in French to back her up. Oh, and she owns a farm in Tennessee, and she's certain that "evidence of global warming is already being felt" there.

She was there because of her celebrity status (which adds to the propaganda value of her testimony), nothing more. Kind of like when environmentalists used Meryl Streep as their front person in the effort to bully Congress into banning Alar back in the late 1980s. The Alar scare turned out to be unfounded as well, but the damage was done.

Corwin, for his part, did not disappoint. He warned that we risk the extinction of a third of all animal species on the planet if we don't Do Something Now. Nothing like some good, reckless alarmist predictions to provoke our legislators into reckless policymaking.
Posted by Tim at 10:41 AM

Why environmentalists may be to BLAME for recent warming 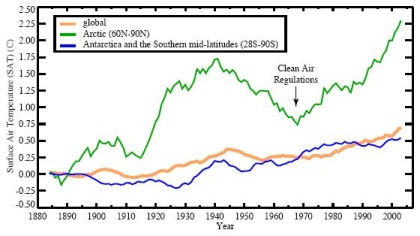 The Register reports on a study by NASA scientist Dr. Drew Shindell suggesting a strong correlation between the fight against acid rain in the 1970s and the abrupt reversal in northern hemisphere temperature trends.

Dr Drew Shindell of NASA's Goddard Institute of Space Studies has led a new study which indicates that much of the general upward trend in temperatures since the 1970s - particularly in the Arctic - may have resulted from changes in levels of solid "aerosol" particles in the atmosphere, rather than elevated CO2. Arctic temperatures are of particular concern to those worried about the effects of global warming, as a melting of the ice cap could lead to disastrous rises in sea level - of a sort which might burst the Thames Barrier and flood London, for instance.

Shindell's research indicates that, ironically, much of the rise in polar temperature seen over the last few decades may have resulted from US and European restrictions on sulphur emissions. According to NASA:

Sulfates, which come primarily from the burning of coal and oil, scatter incoming solar radiation and have a net cooling effect on climate. Over the past three decades, the United States and European countries have passed a series of laws that have reduced sulfate emissions by 50 percent. While improving air quality and aiding public health, the result has been less atmospheric cooling from sulfates.

So, the reduction in sulfate pollution meant the elimination of a significant counterbalance to increasing soot pollution.

Am I advocating the wholesale repeal of sulfate emission restrictions? Not really -- in fact, I'm not ready to concede any human influence in the climate cycle (hence the blog name). I do note, though, that those who believe in consequential human influence on climate must acknowledge that attempts to "fix" what is allegedly broken can often have unforeseen effects.
Posted by Tim at 3:41 PM