They were okay with the statue, but they drew the line at including an altar and incense 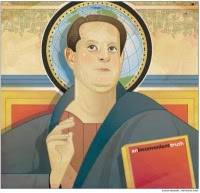 The Tennessee State Senate has, thankfully, rejected a Democrat lawmaker's attempt to have a statue erected in honor of Al Gore's Nobel "Peace" Prize. The Chattanooga Times Free Press reports:

A resolution urging that the state Capitol Commission erect a statue on the Capitol grounds in honor of former Democratic Vice President Al Gore for winning the Nobel Peace Prize failed on the Senate floor today.

The resolution, which also urged a statue be erected for Nobel Peace Prize winner Cordell Hull, failed on a 15-14 vote with most Republicans voting no. It needed 17 votes to pass.

I say "thankfully", because we wouldn't want Gore to start thinking that his Nobel Prize actually meant something.

I am generally opposed to permanent public honors (statues, building/street/park names, etc.) of people who are still living. People -- especially politicians -- have a knack of doing things later that make us want to withdraw the honor.

Just as I believe that people will some day regret naming their kid after Barack Obama, so also I believe that some day -- as the alleged global warming "consensus" collapses like the West Antarctic Ice Shelf is predicted to do -- people will regret holding Al Gore in such high esteem.