If you own a vehicle that depends to any extent on ethanol to run, you may want to set your latte down before reading the following from a February 7 AP article:

The widespread use of ethanol from corn could result in nearly twice the greenhouse gas emissions as the gasoline it would replace because of expected land-use changes, researchers concluded Thursday. The study challenges the rush to biofuels as a response to global warming.

The researchers said that past studies showing the benefits of ethanol in combating climate change have not taken into account almost certain changes in land use worldwide if ethanol from corn — and in the future from other feedstocks such as switchgrass — become a prized commodity.

The researchers said that farmers under economic pressure to produce biofuels will increasingly "plow up more forest or grasslands," releasing much of the carbon formerly stored in plants and soils through decomposition or fires. Globally, more grasslands and forests will be converted to growing the crops to replace the loss of grains when U.S. farmers convert land to biofuels, the study said.

The rebuttal is pretty weak:

The Renewable Fuels Association, which represents ethanol producers, called the researchers' view of land-use changes "simplistic" and said the study "fails to put the issue in context."

Gotta love that ethanol. Touted as an earth-friendly alternative to petroleum, instead it brings us deforestation, rising food prices, food shortages (especially in third-world countries), and lots and lots of CO2. 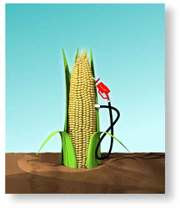 William Tucker writes in a February 13 American Spectator report that our country's current mentality regarding biofuels has roots going back more than 30 years:

From the beginning, the entire biofuels effort has been built on flimsy projections and dubious accounting that were seized upon by politicians eager to demonstrate they were "doing something" about energy. The whole fiasco can probably be traced to a single paragraph in Amory Lovins Soft Energy Paths, the 1976 book that inspired President Carter's embrace of "alternate energy" and convinced California Governor Jerry Brown that his state didn't need to build any more power plants. (Google "California Electrical Shortage" to see what happened there.) In one hasty brushstroke, Lovins outlined what a national biofuels industry might look like:

[E]xciting developments in the conversion of agricultural, forestry, and urban wastes to methanol and other liquid and gaseous fuels now offer practical, economically interesting technologies sufficient to run an efficient U.S. transport sector. The required scale of organic conversion can be estimated. Each year the U.S. beer and wine industry, for example, microbiologically produces 5 percent as many gallons (not all alcohol, of course) as the U.S. oil industry produces gasoline. Gasoline has 1.5 to 2 times the fuel value of alcohol per gallon. Thus a conversion industry roughly ten to fourteen times the physical scale (in gallons of fluid output per year) of U.S. cellars and breweries, albeit using different processes, would produce roughly one-third of the present gasohol requirements of the United States....The scale of effort required does not seem unreasonable.

In other words, since beer and wine were already one-twentieth the volume of our gasoline, a reasonable expansion of distilleries could supply us with one-third of our transportation needs. Unfortunately, this analysis contained a single oversight that has bedeviled biofuels ever since.

Notice that while Lovins estimated the size of the distilling industry, he never mentions the amount of land required to produce the crops. Hops and vineyards currently occupy 40 million acres of farmland. Using Lovins' figure of "roughly ten to fourteen times the scale," that gives us 480 million acres -- more than all of U.S. cropland put together.

Lovins also made a mistake. Although he mentioned that beer and wine are "not all alcohol," he forgot to factor this into the final equation. Wine is 12 percent alcohol and beer is about 5 percent, so let's take 7 percent as an average. This means we must again multiply those 480 million acres by a factor of fourteen. That leaves us with 6.5 billion acres - three times the area of the United States, including Alaska -- in order to produce one-third of our transportation fuel needs in 1977. On this fatal error was the entire U.S. ethanol industry built.

Regardless of how we got here, the news that ethanol is likely doing more harm than good is not likely to lead any time soon to a rethinking of our energy policy.
Posted by Tim at 2:53 PM