Everything's connected, even when it isn't

Here's the scenario that is laid out in a January 6th article: 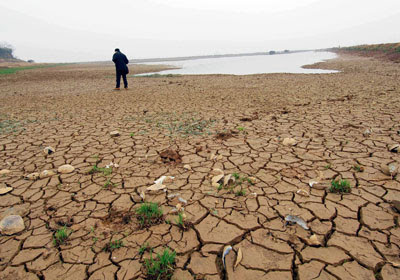 Okay, this is pretty straightforward and statistical, but (apart from the devastating human impact) not that interesting. So what title did Forbes columnist Chris O'Brien choose to draw the reader's interest? Global Warming Hits China.

Is there anything in the essay that might support this notion? We learn that the cause of Poyang's predicament is threefold:
In light of the above facts, Jiang Tong, a member of the Chinese Academy of Sciences and an expert on Poyang Lake, summarized:

Both the stream flows into the river and the Yangtze River water to replenish the lake will be insufficient in dry seasons in the future, because of climate change and the exploitation of water resources.

As I remarked above, there doesn't seem to be any particular scientific reason to tie China's drought to "climate change" (a term of art that is increasingly used in place of "global warming", although Mr. O'Brien apparently hasn't yet received the memo), but there are plenty of political reasons to do so.

Given his position, Jiang Tong can be forgiven for minimizing the significance of the government's "exploitation of water resources", but Forbes has no such excuse.
Posted by Tim at 2:55 PM