What a bizarre way to promote a news network 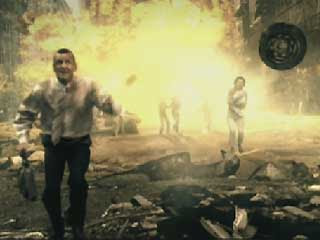 In the ad, translated by the Middle East Media Research Institute, Al Arabiya tries to attract viewers by suggesting that they can learn the effect of local actions on global issues, and vice versa, if they watch Al-Arabiya's news.

They illustrate this by showing a chain of events connecting a man eating chicken in a restaurant, a Brazilian chicken farm, soybeans used to feed the chicken, global warming resulting from energy expended in the production of the soybeans and the raising of the chicken, rising sea levels forcing the poor in tropical islands into refugee camps, embittered refugees becoming radical terrorists, a terrorist blowing himself up on a busy city street, war resulting from the terror attack, global trade disrupted by the war, no soybeans for the chicken farms, no chicken for the restaurants.

Hard to know where to start with this one. You're welcome to give it a go.
Posted by Tim at 4:14 PM