It's much worse than anybody thought!

People with internet access back in the 1990s are probably quite familiar with the multitude of computer virus hoaxes that circulated back then (you do know that they were hoaxes, don't you?). I was greatly amused when someone wrote a way-over-the-top parody of such hoaxes, warning us of the evils of the "Good Times" virus.

Free Republic member Grizzled Bear has updated the parody to warn a new generation that Global Warming will ruin your life. And your hard drive. And your credit rating. And..... here it is (a couple of typos corrected, but -- apologies -- certain indelicate references kept in for the sake of completeness):

Global warming will erase your hard drive. Not the data, but your actual hard drive! Not only that, but it will scramble any disks that are even close to your computer. It will recalibrate your refrigerator's coolness setting so all your ice cream goes melty. It will demagnetize the strips on all your credit cards, screw up the tracking on your television and use subspace field harmonics to scratch any CD's you try to play.

It will give your ex-girlfriend your new phone number. It will mix Kool-aid into your fishtank. It will drink all your beer and leave its socks out on the coffee table when there's company coming over. It will put a dead kitten in the back pocket of your good suit pants and hide your car keys when you are late for work.

Global warming will make you fall in love with a penguin. It will give you nightmares about circus midgets. It will pour sugar in your gas tank and shave off both your eyebrows while dating your girlfriend behind your back and billing the dinner and hotel room to your Discover card.

It will seduce your grandmother. It does not matter if she is dead, such is the power of Global warming, it reaches out beyond the grave to sully those things we hold most dear.

It moves your car randomly around parking lots so you can't find it. It will kick your dog. It will leave libidinous messages on your boss's voice mail in your voice! It is insidious and subtle. It is dangerous and terrifying to behold. It is also a rather interesting shade of mauve.

Global warming will give you Dutch Elm disease. It will leave the toilet seat up. It will make a batch of methamphetamines in your bathtub and then leave bacon cooking on the stove while it goes out to chase gradeschoolers with your new snowblower.

Listen to me. Global warming does not exist.

It cannot do anything to you. But I can. I am sending this message to everyone in the world. Tell your friends, tell your family. If anyone else bothers me with fearmongering concerning Global warming, I will turn hating them into a religion. I will do things to them that would make a horsehead in your bed look like Easter Sunday brunch.

I have one point of disagreement with the author. I do believe in the existence of global warming (although it seems to have plateaued in the past decade), but I remain unconvinced of its alleged anthropogenic nature. I agreed with just about everything else he said, though. AGW hasn't done anything to my hard drive yet, but it did fry my computer's motherboard last summer. 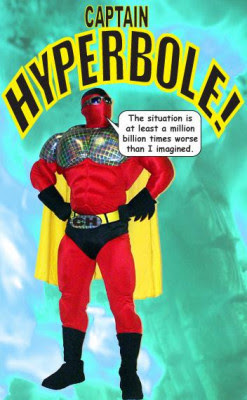