Yes, clean energy is good, but at what cost? And who pays?

President Bush demonstrated in his State of the Union address that congressional Democrats are not the only ones capable of throwing lots of good money at a bad idea. As Reuters reports in a pre-speech article:

THE US will commit $US2 billion ($2.27 billion) over the next three years for a new international fund to promote clean energy technologies and fight climate change, President George W. Bush will tell Congress today in his annual State of the Union speech.

"Along with contributions from other countries, this fund will increase and accelerate the deployment of all forms of cleaner, more efficient technologies in developing nations like India and China, and help leverage substantial private-sector capital by making clean energy projects more financially attractive," the White House said in a fact sheet on Mr Bush's speech.

Is it wrong to "promote clean energy technologies" in developing nations? Of course not. The problem is that misguided climate alarmism produces the urgency that makes it politically acceptable to commit American taxpayer money to such endeavors.

I don't wish to dive too deeply into the American presidential race in this post, but I've got to say that the remaining candidates leave much to be desired on this issue. 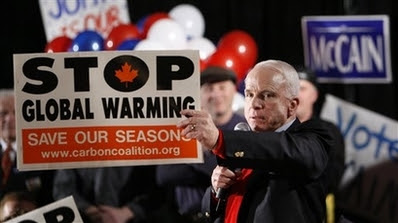