More cracks in the wall of the so-called scientific 'consensus'

Remember the IPCC climate change assessment reports, in which the scientists of the world (the credible ones, anyway) united in the opinion that the debate over climate change is finished? For a long time we've been led to believe (by the media and by the IPCC itself) that the reports themselves represented the consensus of the "2500+" scientists that contributed their expert reviews to the assessment.

The IPCC has now released the reviewer comments on the Fourth Assessment Report, which is the most recent. Read for yourself whether or not a consensus exists.

As the Heartland Institute notes in a press release:

Many of the comments by the reviewers are strongly critical of claims contained in the final report, and they are directly at odds with the so-called "scientific consensus" touted by Gore and others calling for immediate government action. For example, the following comment by Eric Steig appears in Second Order Draft Comments, Chapter 6; section 6-42:

In general, the certainty with which this chapter presents our understanding of abrupt climate change is overstated. There is confusion between hypothesis and evidence throughout the chapter, and a great deal of confusion on the differences between an abrupt "climate change" and possible, hypothetical causes of such climate changes.

Any document coming out of the United Nations can't help being tainted by political agendas, and the IPCC's Fourth Assessment Report is no exception. 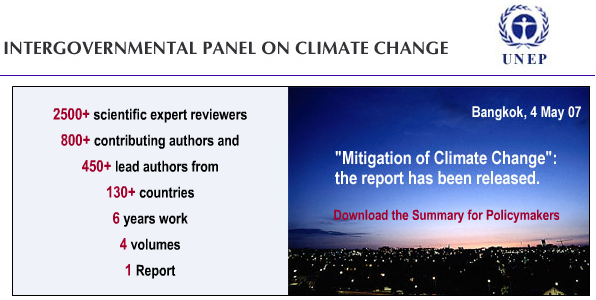